Uncovering the stigma of eating disorders 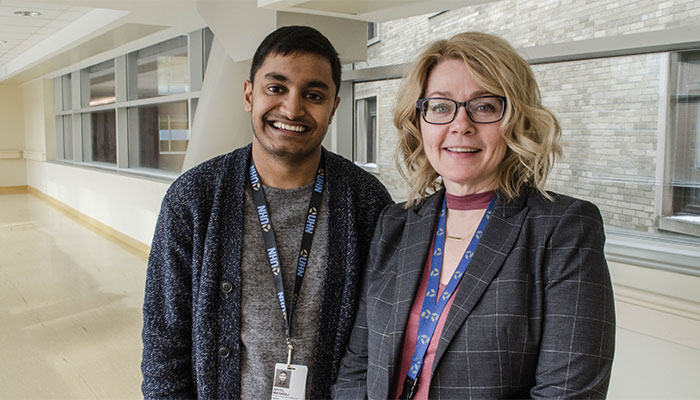 Aryel Maharaj (L) and Suzanne Phillips are from the National Eating Disorder Information Centre, an organization within UHN, and one of many groups across Canada coming together during Eating Disorders Awareness Week, Feb. 1 to 7, to break the stigma and educate the public about eating disorders. (Photo: UHN)

More than one million Canadians, or the equivalent of nearly the entire population of Saskatchewan, struggle with symptoms of eating disorders.

Each year, from Feb. 1 to 7, groups across Canada unite for a week of action aimed at educating the public about eating disorders and the dangerous stigmas associated with them. The National Eating Disorder Information Centre (NEDIC), an organization within UHN, is among those raising awareness.

“It’s in all aspects of that theme: on a prevention level, treatment level and research level. These will all have multifold benefits for the rest of society,” says Aryel Maharaj, Outreach and Education Coordinator at NEDIC.

“Canadians deserve that level of quality of care around having a healthy relationship with food and their bodies.”

The presence of stigma is especially high around eating disorders, and for that reason, Suzanne Phillips, Program Manager at NEDIC, says her team is careful in their work. This week gives eating disorders groups a period to heighten the awareness around those stigmas and work towards eliminating them, she says.

Through its aim to educate the public 365 days a year, NEDIC has conversations targeted to certain audiences where being careful not to further stigmatize those with eating disorders takes on different meanings.

Aryel says, for example, while working with youth it means discussing topics relevant to eating disorders without directly focusing on what eating disorders are and their symptoms, to avoid the risk of information misuse that may have the opposite affect.

Big challenge is having safe conversations that don’t further stigmatize

Instead, Aryel says his team focuses on discussing less-stigmatizing topics that are important to eating disorders, such as having low body self-esteem, Photoshop and image editing, dieting and healthy relationships with food. He says they also discuss the intersection between a person’s biology, psychology and society that may impact how they feel about themselves.

“Do we end up with kids afterwards, who when they were with their group of friends didn’t say anything, but stay around and come to me with questions? Absolutely,” Aryel says. “And we always are sure to announce we will stick around to talk after presentations.”

When NEDIC hosts panels for parents, the team has a temporary phone set up, so people can safely text in anonymous questions rather than having to raise their hands and identify themselves, as some parents may not feel comfortable expressing their worries publicly.

Aryel says this is one of the struggles his team faces when engaging with the public: how to have safe conversations that don’t further stigmatize, but rather reduce the stigma through proper education.

“We certainly try to accommodate the reality (of existing stigmas), but the ultimate goal is not having to accommodate in this way because we would all feel comfortable talking about eating disorders,” he says.

This year’s awareness week features a “Show Us Your Purple” social media campaign, which is an opportunity to reduce the shame and stigma associated with eating disorders. Everyone is encouraged to take a photo of themselves wearing something purple, or a purple object around them, and post it to social media.

“This week just really sends a message to those people who are suffering and their families that we hear you, we see you and we support you on whatever level that might be,” Suzanne says. “It’s recognition.”​